Defection from the Catholic Church – Update! 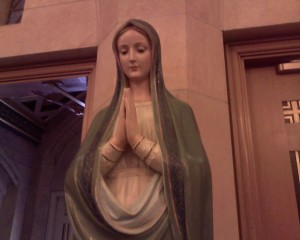 I did get a response to my Declaration of Defection last year. It was rather disappointing. The bishop basically said the church won’t consider me non-Catholic because I’m not converting to another religion, and asked me to call some priest to discuss why God is real. I briefly considered calling, but I’m just not willing to invest any time, energy, and stress into this. What is the guy going to say to me? Nothing I haven’t heard. I find their evidence for Jesus et al. very unconvincing, so why waste both our time?

I think the bishop was being a bit disingenuous in his letter, as he failed to mention that the Catholic Church doesn’t even have Defection anymore. There just isn’t any way to have them record officially that you are not a member. Yes, it’s annoying. I would rather not be associated with them or risk them using my “membership” as part of their clout. But on reflection, I suppose it doesn’t matter much. I don’t give the Catholic Church any of my time or money, and I know that I have left the institution far behind. They will still have a record of my baptism without any notation that I jumped ship, but when it comes down to it, I guess it isn’t a big deal if they have my name on a piece of paper somewhere.

As far as I know, there aren’t any laws in the U.S. that would require a church to remove you from their membership list upon request. As long as they aren’t doing anything to you, but simply have a record of your baptism in their books, I don’t think they are violating any law. And after all, those records are just documentation of an event that did in fact occur.

While it’s just an anonymous forum post, it seems this person has run down the situation very well. In short, you leave by not participating and by considering yourself non-Catholic. Having the church officially acknowledge that is really only going to happen if you ever want to participate in a sacrament again. (Fat chance.)

Just a word about excommunication here: you can try to get excommunicated, but there’s no real point. Excommunication does not remove you from the church. People who are excommunicated are explicitly considered current Catholics, but the church denies them the sacraments in an effort to pressure them into repudiating their sin and coming back to the fold (sins like saving the life of a mother at the expense of her non-viable fetus for instance). So I wouldn’t bother.

There you go – this ended rather with a whimper than a bang. I’m sorry dear readers that I didn’t have the patience to call and recount the priest trying to convince me to come back. Maybe someday, if I ever get really, really bored I’ll give it a go.

Posted on May 1, 2013, in Religion and tagged Catholicism; defection from Catholic Church. Bookmark the permalink. 5 Comments.