There’s a lot of argument over this toy: is it feminist, or does it perpetuate pink princess stereotypes? Do girls and boys play and think differently? If so, should we use those differences to lure girls into STEM? Or should we assume that boys and girls actually tend to play and think the same way, when allowed to?

I don’t have answers to all these questions. But I can tell you I was really excited about this toy when it was first announced. Now that my five year old daughter has actually played with it, I’m a little disappointed. Ultimately I’d say it’s not worth the money, and other building toys are better. Upshot – the best thing about Goldie Blox is that it inspired me to buy some Tinker Toys for my daughter.

The drawbacks come in two categories – the toy actually has some sexist elements*, and the play value of the toy is limited:

The tantalizing thing about this toy is that you could play with it in many other ways. There are slots on the top and on the sides of the board that accept the spindles. Likewise, the wheels have all sorts of holes, some of which fit tightly with a spindle, and some of which allow it to move freely. The blocks can be used as connectors, so you could build structures and include spinning, turning, and swinging elements. If only you had way more pieces. 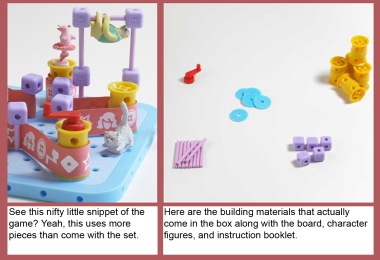 Goldie Blox’s website draws attention to both the possibilities and the insufficiencies of their product on the Play page, which features constructions far more imaginative than the suggestions in the instruction booklet. However, many of them require a lot more pieces than come in the box. You can theoretically order a “Blox + Bits” expansion set, but currently it’s sold out. And honestly, if you ponied up $30-$60 (!) for ten measly spindles, do you really want to fork over $9.99 for some more?

Bottom line – this is an underdeveloped, under-equipped building kit with a slightly novel mechanical aspect (the ribbon) and a lot of flashy marketing. I don’t hate it, but I don’t think it’s worth the $29.99 I spent. I certainly don’t recommend spending $60 or more for it!

* I hear tell that the follow-up game is even worse, the goal being to help a friend win a princess pageant and ride a parade float. I haven’t seen that game, so I can’t comment, but it seems consistent with Goldie Blox’s intentional “girls are girlie” approach.