No Virginia, There Is No Santa Claus, by Greta Christina

‘Twas the Night Before Reason, via The Friendly Atheist

“What an odd question . . . I adore Christmas. The fact that I know that Christianity’s origins lie more in Paul of Tarsus’s mental illness and [Emperor] Constantine’s political savvy than in the existence of the divine has no bearing on my ability to embrace this age-old festival of giving, family and feasting.” – Tim Minchin

And since we’re talking about Tim, here’s his Christmas song, White Wine in the Sun:

I noticed the irony that Tom Flynn really looks quite a bit like Santa when he’s in his Anti-Claus getup.  Then I happened to read a tribute to Christopher Hitchens by Daniel Dennett, and the picture of Dennett made me investigate a bit further.  Now, I give you a surprising number of famous atheist “Santas.”  Mouseover for names. 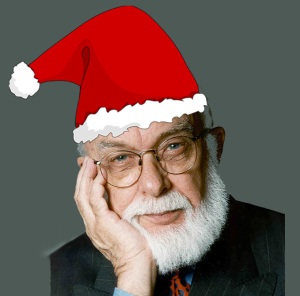 I may not be posting new stuff until the 26th, as we’ll be busy partying with family.  Joyous Chrismahannukwanzaakah, Happy Yule, Merry Solstice, Felicitous Humanlight, and so on and so forth.  Whatever you’re doing during this season, I hope you have fun.  Tom, I hope you enjoy the easy drive to work and the peace and quiet once you get there!

The Really Big, Important Question: What About Santa? 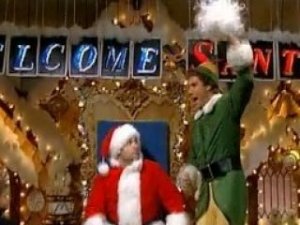 You sit on a throne of lies!

My parents didn’t try to convince me Santa was real.  We had lots of fun pretending, and I never felt deprived.  I do feel it helped cement a bond of trust with my folks – I knew I could rely on them to tell me the truth.  So I never really considered instilling Santa belief in my kids.

For the past few years, Chloe has had such a ball being in on the big secret of Santa, I can’t help but think it will contribute to her being a skeptic. Her personality is definitely oriented toward wanting to be right, in the know, and a keeper of knowledge. She adores being proven right when we disagree about something. And recently I had to pull her aside several times at a friend’s party because she kept interrupting his Grandpa’s magic show, yelling, “I know that’s just a trick,” and such.

Which brings up another point – having a child who knows Santa is pretend is an opportunity for teaching about politeness and sensitivity to others.  I didn’t outright discuss what the Santa deal was until I could be reasonably sure she wouldn’t immediately tell all her friends their cherished beliefs were balderdash.  We know that Santa’s pretend, we like to play along for fun, and we don’t trample into other people’s conversations about him with, “You know he’s not REAL, right?!”

As you can see, this is great practice for coping as a religious minority.  There’s a good chance my kids will be freethinkers, or at least unorthodox in a big way, and negotiating the social landscape of Santa belief is a great way to get them used to different people believing different things, and not butting into other people’s sensitive ideologies with ostentatious skepticism.

One other thing a-Santaism provides: many people get a feeling of being special, wise, or gifted because of their religious beliefs. I can see that Chloe feels this way about knowing the real deal about Santa, and I’m glad my daughter has a foundation for feeling these (admittedly sometimes venal) emotions as inspired by knowledge about the natural world, skepticism, and inquiry.