Hey benighted Christian extremists, I don’t think that image about how “bad” Girl Scout cookies are because they support feminism and reproductive rights is working the way you mean it to!

In any case, here’s my response: 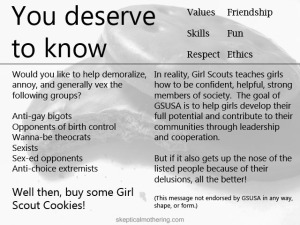 Why conservatives should vote against Amendment One 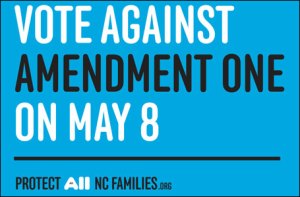 1. Amendment One will cost North Carolina taxpayers a lot of money, while delivering absolutely no benefit.  It’s virtually certain that a same-sex couple will challenge this provision in court, and the litigation will cost immense amounts of money.  Money that will come out of our paychecks.  In the meantime, Amendment One doesn’t make same-sex marriage any more illegal in NC than it already is.

2. It is unconstitutional.  The Constitution of the United States supersedes all state constitutions.  And under the US Constitution, this amendment is illegal for two reasons.  First, it imposes religious rules through the government.  (And if you think that’s OK, or it’s all right as long as there’s no explicit reference to religion, ask yourself how you’d feel if a group of Muslim legislators proposed an amendment that requires women to have their hair covered in public.)  Second, it denies equal protection of the laws to all citizens.  Thus, Amendment One violates the first and fourteenth amendments to the US Constitution.

3. It could have terrible unintended consequences for children, women, and for our economy.  The amendment is worded in a terribly broad way.  It doesn’t say “Marriage is defined as a union between one man and one woman,” or “No one may marry someone of the same sex.”  It says “Marriage between one man and one woman is the only domestic legal union that shall be valid or recognized in this state.”  That language entails the prohibition on state agencies, and possibly even private companies, to recognize any domestic legal partnership other than straight marriage.

Sure, it is possible that in the end, some courts will eventually interpret the amendment as still allowing domestic violence protection, child health insurance, and other rights unmarried partners have now (whether gay or straight).  But legal battles take lots of time and money.  Is it really OK with you that a battered woman might have to litigate at the trial level, the appellate level, and finally the Supreme Court of NC before getting a restraining order from her violent live-in boyfriend?  Is it worth it, for the sake of simply reiterating how much we hate gay marriage, to give health insurance companies a convenient excuse for denying the claims of children whose parents aren’t married?  Is it a good, conservative decision to give companies a reason to avoid NC because the status of their employees’ benefits would be uncertain?

Remember that in every legal case, in every health care coverage dispute, in every child custody hearing, there are two sides who will use every legal tool at their disposal.  Sure, you as an individual may be able to interpret Amendment One and conclude that it’s not intended to disrupt domestic violence protections and so on.  But in each legal battle that involves these issues, the defense lawyer for the abusive partner, the lawyer for the insurance company, the absentee parent who suddenly decides to uproot a child from the only family she’s ever known, they will all brandish Amendment One for their side, and they will drag the case through every level of the court system they can.  Even if, finally, the sane side prevails, there will be terrible misery, chaos, and expense in the meantime.

And for what?  What does Amendment One offer to counterbalance these risks?  Nothing.  If everyone votes against Amendment One, gay people still won’t be able to get married in NC.  So why are we willing to risk all these expensive, morally troubling outcomes for it?

Everyone in NC should go vote AGAINST! 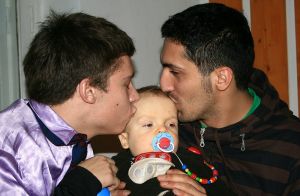 When they were arguing for Prop 8 in federal court, backers claimed “that society is entitled to reserve its approval of marriage for those who can naturally conceive children.”  The Family Research Council lists “The Top Ten Harms of Same-Sex ‘Marriage‘” and number 9 is “Birth Rates Would Fall.”  (Yes, seriously, they list that as a harm.)  The Administrative Committee of the U.S. Conference of Catholic Bishops has stated, “What are called ‘homosexual unions,’ because they do not express full human complementarity and because they are inherently nonprocreative, cannot be given the status of marriage.”

Psst, bigots – there’s something you should know.  Gay people be having babies all the time!  S’truth!

Famous gay people who have as many kids as my parents (married in the Catholic church!) do:

And some who have as many kids as I do:

And queer folk who have out-procreated me:

Cat Cora (for two of their children, each partner was implanted with the others’ fertilized egg.  I find this incredibly sweet, as well as a damn good answer to any argument that gay couples can’t both have a biological link to their kids.)

And let’s not forget that lesbian couples make the best parents!

Now, what was that argument about marriage being reserved for procreation and the ideal environment for raising children again?